The six of the team members; Batrisyia, Syafiq, Mei, Trista, Joey and I, as well as two spectators, gathered at the cafeteria to wait for our van to arrive. We all felt a wave of anxiety wave over us as we stepped out and saw the other schools (or rather, our fellow competitors) who had been gathered at the place. 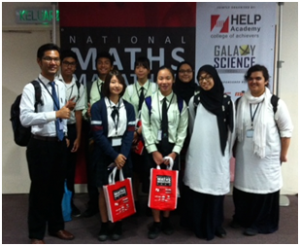 After walking through several corridors around the seemingly large area, we finally arrived at the entrance to the auditorium where we – along with Mr Alvin – took a group photo. We were then led to the auditorium, which was a large hall with red seats placed encircled towards the centre stage. It was very similar to that of a Greek theatre. The seats were mostly filled with students of all race and gender, coming from every state all over the Western Peninsular. There, a hostess talked us through the history of Malaysia’s National Maths Competition, (it has been going on for several years) and the prizes (the top prize was about RM3000, along with three scholarships for each member of the team!). It was then the time for us to disperse to take the test.

There were twenty of us there. I assumed the other twenty Team Member No.3s must have been in a different room. We were given our papers, which were slimmer than I had expected. There were 40 questions: 20 were multiple choice and the other 20 were to be written in a sentence. With a nervous gaze at the paper, I only hoped my mind would think as logically as possible for the test.

We were asked to begin. The first question wasn’t too bad, but then I got to the next few questions and… Wow. Trying to figure out a structure for solving each question didn’t fail to stretch my brain, much less when it came to actually solving the questions. But nevertheless, Joey and I tried our hardest.

The test ended sooner than I had expected. With a brain going overdrive doing extreme mathematical calculations mixed with the complexity of simple logic, I cooled down when the teachers came to collect our papers. Following that was lunch, which they had kindly provided, and afterwards we were scheduled for a visit at the lab.

There at the lab, we were introduced to incredible new holographic technology, unlocked in the palm of our hands. We were told to open an app on the iPad that would put it on camera view, scan a code, and point the device at a picture of an air con diagram. What popped out on the display was the same diagram but 3-D and holographic. Evanthe reacted dramatically and did more so when the instructor tapped the hologram. It was brought to life! We could see the particles zooming in and out in a cycle. All of us were pretty fascinated.

We looked through other displays: one I saw was of a glucose molecule, and another was a fossil. You could easily interact with the hologram by: moving it around the screen, modifying the size, spinning it round in circles, etc. It was like seeing the future.

The final round of the competition was yet to begin. We were seated – once again – at the auditorium, where a man who specialized in Maths gave a speech about Maths itself, and his experience as a tutor. Afterwards, other information about considering A-Levels with HELP was given, the holographic technology was further explained, and then finally we were told which three teams would be going into the final round.

I was curious as to who would get through and what questions would be answered. We weren’t too disappointed when it was revealed we weren’t part of the top three teams. I still spectated and focused on each question like I was still part of the game. The questions appeared on a projector and were read out. The rules were simple: Find the answer, write it on the whiteboard given, hold it up when the bell rings, and if it is right, a point goes to your team. There were 20 questions.

Some questions were simple; I could easily discuss them with some classmates. Other questions had us all baffled. They all had a part of our syllabus- just taken to the next level. After some incredibly difficult questions which the teams had all guessed right, we clapped along with the audience. Their intellect for Maths was quite impressive.

The competition was over. The winning team had won by one mere point. Prizes were given, applauds were blaring through the auditorium, and then it was time to go. I left with a lasting, and satisfied feeling. Sure, we didn’t win anything, but what really mattered was taking part and having a fun experience together, with your schoolmates. Taking those IQ tests opened up my mind and put my brain to its full potential; a new challenge for not just me, but for everyone else who took part. And what’s more, we were allowed to go out to Starbucks while waiting for the van, which made the whole thing truly worth it!